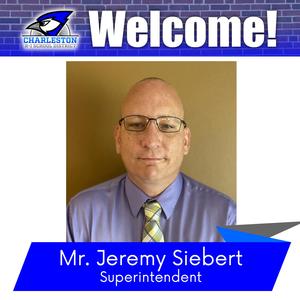 The Charleston R-I Board of Education is pleased to announce that it has unanimously approved the employment of Mr. Jeremy Siebert as the next superintendent of the Charleston R-I School District.
Mr. Siebert will begin his duties starting July 1, 2020, bringing with him 22 years of experience in education, including 13 as an administrator. He has spent the last 6 years as Superintendent of Twin Rivers R-X School District, Broseley, MO. Before his time at Twin Rivers, he was a principal for 7 years between Scott County R-IV (Kelly) and Campbell R-II.
Mr. Siebert received his BSE degree from Southeast Missouri State University in 1998 after transferring from Missouri Valley College where he played basketball. He received his masters degree in 2001 and his specialist degree in 2004, both from William Woods University.
Mr. Siebert has been married to his wife Mika for almost 19 years; they have 3 children: Kaden (17), Conor (13), and Kennan (12).
“I am very much looking forward to being a Blue Jay and becoming a part of the Charleston R-I School District and community,” said Mr. Siebert.
The appointment of Mr. Siebert derived from a superintendent search in collaboration between the Board of Education and the Missouri School Boards’ Association (MSBA), led by Dr. Jerry Waddle. Dr. Waddle accepted applications and, with the help of the Board, narrowed the search to six candidates in late March.
“We look forward to working with Mr. Siebert,” Board President Hamil Corse shared. “The Board gathered feedback from the recent meetings, and one major concern we heard was the budget. We believe Mr. Siebert will be able to put our budget where it needs to be and continue our momentum with the facility updates. We are excited to have him on our team.”
Mr. Siebert will take the reins from Dr. Tammy Lupardus, who recently announced her departure. Dr. Lupardus has served Charleston R-I for 4 years as Superintendent, her first superintendency. In July, she will become Superintendent of the Mexico 59 School District.